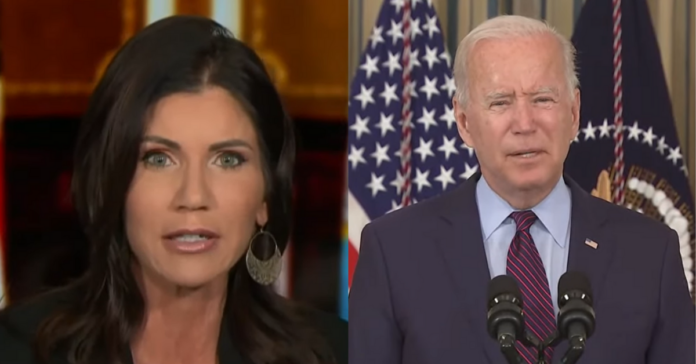 South Dakota Gov. Kristi Noem justified sending South Dakota National Guard troops to the border because of “complete failure of leadership” from President Joe Biden likening the deteriorating situation at the border ‘in many cases as a war.’

She said: “Our Guard was there for 60 days. We deployed them down there. When the Texas governor and Arizona governor asked for help and resources, they asked for law enforcement. But as I evaluated what the needs were down there — first of all, we were having historic visitation to our state, so I didn’t want to shortchange my law enforcement agencies that enforce public safety throughout South Dakota.

“But also, looking at the mission that was there and the situations they would be in, the people that are trained specifically for that type of a mission is my National Guard.

“We have consistently, for years, had the best-rated, ranked, and awarded National Guard units in the country, and they are used to deploying, filling in, and working with other agencies, federal agencies, state agencies in cooperative levels, and they’re used to going into war.

“And what we’re seeing on the southern border, in many cases, is a war.

“I wanted them to be trained for those situations and make sure that they all came home safe. “So they’ve been home now for a few days, and we will redeploy in October.

“And I brought another 125 National Guard members to go down there and again support the mission of making sure that that southern border can be as secure as we as states can do that.

Noem called out Biden for a “complete failure of leadership” on the border before saying his incompetence (when including the debacle in Kabul) “has shocked people to the core.”

“They’re paying attention, and it’s up to us to really articulate the difference in what we did have under President Trump and conservative leadership and what we have today with the Biden White House — that a nation without laws isn’t a nation at all.

“And we’re quickly getting there, in fact, faster than I thought we would, under this president,” she said.

Today, we submitted our application for the 2022 Mount Rushmore Fireworks Celebration.

We believe the Biden Administration’s arbitrary, flawed decision will be overturned.https://t.co/aEpj35N5K0

Texas officials are getting set for a possible surge of more than 60,000 Haitian migrants at the border with Mexico, according to the Washington Examiner.