Joe Biden Heckled By Protesters In Key Swing State Michigan: “We’re not happy with the way our country’s going and the job he’s performing, we would like him to step down” 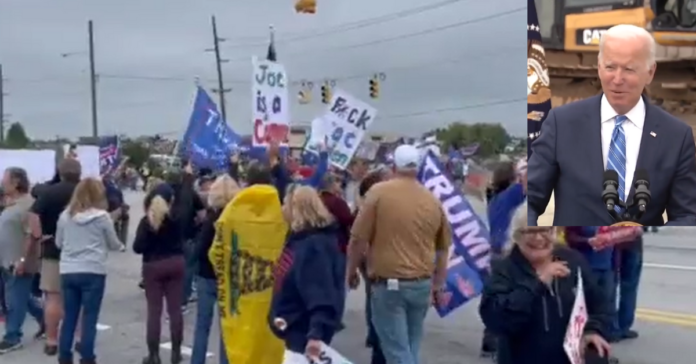 President Joe Biden was once again met with protesters after leaving the safe confines of the White House. This time Biden was met with heckles in the critical swing state of Michigan.

“The money has to come from somewhere,” protester Londa Gatt said. “You can’t keep printing it.”

“I think this is reflective of how upset people in everyday America are, when you leave the Washington bubble, about the spending going on in Washington, D.C.,” Meghan Reckling, chair of the Livingston County Republicans said.

“Our children and our grandchildren are going to be in debt for basically eternity now,” she added.

“Sleepy Joe thinks that this is sleepy little Howell and it’s not,” protester Jackie Ludwig said.

“We’re not happy with the way our country’s going and the job he’s performing. And we would like him to step down.”

From The Detroit News:

Biden’s visit came as the fate of his agenda has stalled. The moderate and progressive wings of the Democratic Party are at odds over what to include and how much to spend in the social services and climate legislation, which will need unanimous support in the caucus to pass the evenly divided Senate and have Vice President Kamala Harris cast a tie-breaking vote.

It would be paid for in part by tax increases on wealthy Americans and corporations.

Republicans have argued that the cost is too high and the proposed tax increases would hurt economic growth.

Democrats are working to draw on board the party’s centrists, who insist the bill’s $3.5 trillion top line figure is too high, while retaining support from the party’s left wing, which would like the package to be bigger and already considers the proposal a compromise.

Biden understands that if the nation is going to make the proposed investments, lawmakers have to be able to pay for them, she said.

“He was generous enough to give me a ride from the airport, and we talked a lot about the fact that we’re not going to take this bill and pass on more debt to our kids,” Slotkin said.

Biden on Friday urged the party not to decouple the two bills. Senate Majority Leader Chuck Schumer, D-New York, said Monday the party now plans to pass both plans before the end of October, when funding for major transportation programs runs out.

This is how Biden was greeted in Michigan today pic.twitter.com/T825RSqfYL

This Michigan crowd is VERY excited for Joe Biden pic.twitter.com/Xhhat0PgP8