Hunter Biden Cashes In With First Art Sales, Unloads 5 Pieces In LA For $75,000 Each 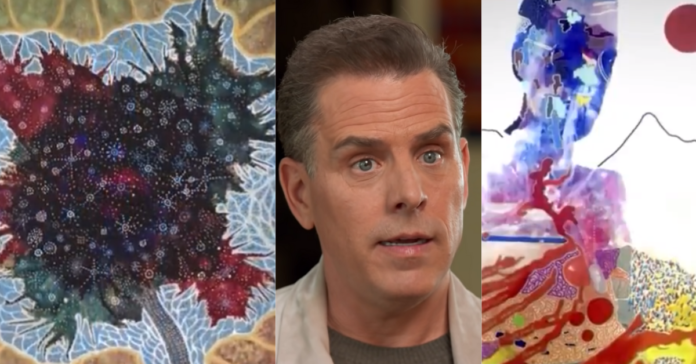 Hunter Biden just sold his first five pieces of artwork, according to multiple media reports. Hunter infamously worked a deal with the White House to let this obvious grift go on promising the American people that the buyers would be anonymous.

According to the reports, Hunter sold five prints for $75,000 apiece. The Georges Berges Gallery has been hosting Biden’s artwork and sold the prints while conducting a pop-up showing in Los Angeles.

“Most of those allowed to buy works are long-term, private collectors with the gallery, people that Berges knows personally,” a source said.

“I would be amazed if my art sold for $10, just because the first time that you ever go about it — is the idea that someone is attracted to your art, let alone that they would pay something for it,” Hunter said in July.

“I do know enough to know that the value of an artist’s work is not necessarily determined by the price. But the price is completely subjective, and sometimes has nothing to do with anything other than the moment,” Hunter added.

At least five prints of Hunter Biden’s artwork have already been sold for $75,000 each and a team of lawyers is vetting potential patrons who plan to attend his upcoming gallery show in New York City — which has now been delayed until the spring, The Post has learned.

The Georges Berges Gallery sold the prints before the Oct. 1 opening of a “pop-up” presentation in Los Angeles, a source familiar with the matter said Thursday.

It’s unclear who purchased the reproductions — which cost a fraction of the top price of $500,000 for an original piece by President Biden’s scandal-scarred son — or if any more were sold after the LA show opened.

Richard Painter, President George W. Bush’s chief ethics lawyer, said the LA showing, where Hunter was hanging out with around 200 guests, “just illustrates how this veil-of-secrecy idea is not happening.”

“It shows the deal’s not going to be secret,” he said. “I think the White House needs to go to Plan B.”

Seems pretty expensive for an iPad cover but that’s just me https://t.co/GKBjVWhzwa

The FBI made one admission that infuriated conservatives