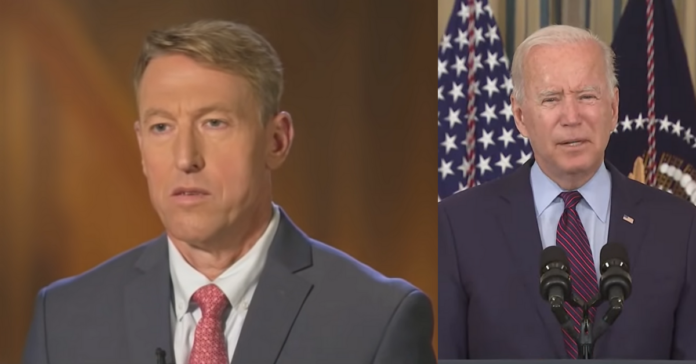 Rodney Scott, the former chief of the United States Border Patrol, came clean about the border crisis making him the highest-ranking ex-Biden official to do so.

He ripped the Biden administration saying they were briefed during the transition and told that if they followed through on their plans the border would devolve into chaos.

Scott said: “The real thing that’s changed is the focus on border security in general, and acknowledging that border security is critical to homeland security, and actually trying to control the border,” Scott told Fox News anchor Bret Baier. “The messaging has changed. I personally participated in some of the transition meetings, my staff participated in all of the transition meetings, we made it very clear that if we dropped all the initiatives that had been put in place over the last several years, that we would get an influx of mass migration that we would not be able to control. The current secretary, Mayorkas, he work is he was part of DHS before, he ran CIS. He clearly understands and knows how to control the border and what needs to take place.”

He also claimed there were 400k ‘gotaways,’ people who crossed illegally into the US. The transcript and video are below:

BRET BAIER, FOX NEWS ANCHOR:  We are going to talk now more about the border situation in depth with the former head of Border Patrol, Rodney Scott. Rodney, thanks for being here. You retired in August of this year?

RODNEY SCOTT, FORMER BORDER PATROL CHIEF: That is correct. Thank you for having me, Brett. Appreciate it.

BAIER: This makes you the highest ranking ex-Biden official to speak out. But you also worked in the Trump administration?

SCOTT: That’s correct. I started as chief in February of 2020. And then through the transition for the first seven months of the Biden administration.

BAIER: You’ve been at this for a long time, though.

SCOTT: I started in San Diego in May 1992. It’s kind of an important part of my career, though. That’s when the whole mass migration issue is going on nationally. And then in 1994, is when the Operation Gatekeeper got kicked off. And I had a front row seat to that as a young agent, that was forming years of my career, if you will.

BAIER: Yeah. So, 30 years as a civil servant dealing with border issues primarily, obviously, you’ve briefed both parties, but you’re not a political guy.

SCOTT: Correct. I’ve done my best to stay nonpartisan. I’ve obviously have not hesitated to advocate for border security. But I just lay out the facts. Without politics.

BAIER: Well, let’s talk about the facts. And what has changed from the Trump administration border policies to the Biden administration’s now.

SCOTT: The real thing that’s changed is the focus on border security in general, and acknowledging that border security is critical to homeland security, and actually trying to control the border. The messaging has changed. I personally participated in some of the transition meetings, my staff participated in all of the transition meetings, we made it very clear that if we dropped all the initiatives that had been put in place over the last several years, that we would get an influx of mass migration that we would not be able to control. The current secretary, Mayorkas, he work is he was part of DHS before, he ran CIS. He clearly understands and knows how to control the border and what needs to take place.

BAIER: So, if that’s all true, then what’s the motivation do you think?

SCOTT: That’s where you get into the politics. I’m not going to speculate on what anyone’s motivation is, but I do know, that they were briefed, it was very clear. There are people involved in this process that have been involved before, and they’re choosing not to take simple common sense steps to secure the border.

BAIER: Can you, for the average viewer at home, articulate kind of the difference about what would happen if an illegal immigrant came when you were Border Patrol Chief, before January 20, 2021, and what happened after.

SCOTT: With Title 42, and that was a Health and Human Services regulation for COVID, you got to carve that that part of it out, if you will, they would be met at the border immediately fingerprinted, photographed for record checks quickly, and then expelled back to the country they came through. And so during that time, the vast majority of people were quickly expelled back to Mexico or back to Canada, or other countries, even where we had flights taking place to quickly get them out of the country and then keep America safe. That was slowly chiseled away. So right after the administration changed, there was some messages that went out, if you will, that we were no longer going to expel anyone under 18, unaccompanied minors. So as soon as there’s any vulnerability that we show, or any certain class of people that we carve out to be processed under different processes that are going to allow them to come into the U.S., that will be exploited. We saw that immediately with the unaccompanied children. A couple of other decisions later, they started expanding out vulnerable populations, family groups coming through Mexico that’s increasingly were getting released into the U.S. and processed under Title 8 instead of 42.

BAIER: That’s families, pregnant women. And suddenly it was expanded beyond anybody under 18.

SCOTT: And then that just continued to expand, correct. And what’s the result of that? The result of that is the message goes out. And then instead of having a couple hundred encounters a day, we quickly went up to about 6,000 encounters a day. The little bit of misleading messaging in the public today too is they think this is just Mexico or South America. Border Patrol caught people from 150 different countries coming through Mexico into the United States, this last year before I retired.

BAIER: –coming through the border?

SCOTT: Correct. It’s basically, just think like football. Basically, they fake a play over here and the real plays go into the left. So when we get distracted with 15,000 to 20,000 Haitians under a bridge that resulted in several hundred miles of border having no Border Patrol agents on at all. That’s where the cartels push the narcotics through, the criminal aliens, people that will not give up. We have over 400,000 documented gotaways, people or incidents where people crossed the border and got away this last year and hundreds of miles of border, where we have no idea what took place. That’s what mass migration creates.

BAIER: You’re talking about the cartels and moving all kinds of material, but specifically drugs, correct, through the border? So this, look at the shiny thing over here happens every day?

SCOTT: It happens every day. And it happens increasingly, the more that they can distract, the more that they can overwhelm our resources. So for example, in Del Rio, 100% of the Border Patrol agents for a couple of days, we’re focused on that bridge. But we also keep forgetting that’s a big wide border. McAllen is still out of control, Yuma is getting overrun.

BAIER: Biden administration has claimed that the thousands and thousands of illegal immigrants that they have released into the country over the last several months are being quote ‘tracked’. And that they have implied that there’ll be consequences if they don’t show up for their court hearings. Is that true?

SCOTT: Again, it’s a spin. So I can’t say that it’s not true. But I can say they’re not all being tracked.

SCOTT: Just by manpower issues and if every single one of them are being tracked currently, then that has to mean 100% of fugitive operations got shut down.

BAIER: And if they skip court, I mean, they’re not even really allowed to just go after them for that?

SCOTT: Correct. That is accurate. And 90% don’t ever get deported.

BAIER: How big a national security threat is it, that border?

SCOTT: I think it’s a real, real big issue. So knowing that we have 400,000, documented gotaways, when we have less situational awareness than we’ve ever had before. But what we know about every single one of those is they did not want to meet a law enforcement officer. They were not surrendering. They were not claiming asylum. They were doing everything they could, they probably paid extra to be able to go through one of those gaps the cartel controlled.

BAIER: So when you hear Secretary Mayorkas say the borders as secure now as it was before. What do you say?

SCOTT: That’s just not true. He knows what’s going on. And he knows that border is not as secure today as it was on January 19th.

San Francisco Archbishop Puts Nancy Pelosi On Notice: “A conversion of heart of the majority of our congressional representatives is needed on this issue, beginning with the leader of the House, Speaker Nancy Pelosi”