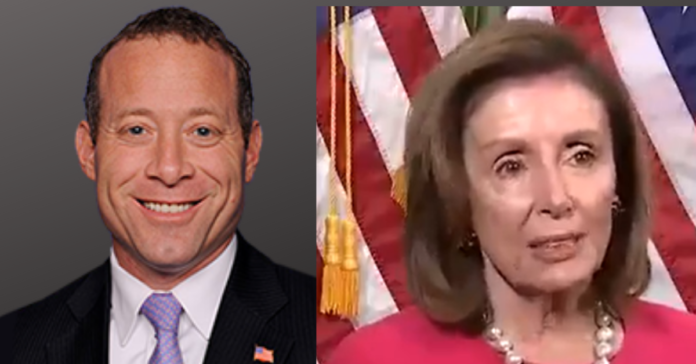 Reps. Josh Gottheimer (D-N.J.) and Stephanie Murphy (D-Fla.) trashed Speaker Nancy Pelosi (D-Calif.) late Friday for failing to have a vote on the bipartisan infrastructure bill passed in the Senate

Gottheimer issued a statement that said: “It’s deeply regrettable that Speaker Pelosi breached her firm, public commitment to Members of Congress and the American people to hold a vote and to pass the once-in-a-century bipartisan infrastructure bill on or before September 27. “Specifically, the Speaker said, “I am committing to pass the bipartisan infrastructure bill by September 27. I do so with a commitment to rally House Democratic support for its passage.” That agreement was sealed with the vote of every Democrat in the House on August 24, which put the commitment in writing.

“Along with a group of Members, I’ve been working around-the-clock to pass the bipartisan infrastructure bill, legislation we helped craft back in April with my Senate colleagues.

“But a small far left faction of the House of Representatives undermined that agreement and blocked a critical vote on the President’s historic bipartisan infrastructure bill.

“We cannot let this small faction on the far left — who employ Freedom Caucus tactics, as described by the New York Times today — destroy the President’s agenda and stop the creation of two million jobs a year — including for the millions of hard-working men and women of labor. “We were elected to achieve reasonable, commonsense solutions for the American people — not to obstruct from the far wings.

“This far left faction is willing to put the President’s entire agenda, including this historic bipartisan infrastructure package, at risk.

Murphy issued a statement that said:

“I am profoundly disappointed and disillusioned by this process. The bipartisan Infrastructure Investment and Jobs Act will improve quality of life and create good-paying jobs for the American people. It will upgrade roads and bridges, expand rail and bus services, modernize air and sea ports, and deliver high-speed broadband and clean drinking water.

“The bill will also make historic investments to combat climate change—an existential threat to our planet, our country, and the Florida way of life. The bill is a critical component of President Biden’s agenda, passing the Senate with support from all 50 Democrats and 19 Republicans. It’s popular among Americans of all political stripes.

“While I have great respect for the Speaker, I believe her decision to again delay a vote on the bipartisan infrastructure bill is wrong. The Speaker pledged that the House would consider this bill on September 27 and that she would rally the votes to ensure the bill has the best chance to pass. This promise was enshrined in a House resolution that every Democrat supported. This written commitment was the only reason there were enough votes in the House to even start the reconciliation process—that is, to begin the process of writing the Build Back Better Act.

“The Speaker delayed the vote because some of my Democratic colleagues, in a misguided effort to gain ‘leverage’ over their fellow Democrats in the negotiations on the separate Build Back Better Act, have threatened to vote against a very good infrastructure bill. I hope my colleagues will reconsider their approach.

“Whether they do or not, all members of the House should be required to cast a vote on the bipartisan infrastructure bill and to accept the consequences of that vote.

“My position has been clear from day one. I support passage of the bipartisan infrastructure bill. I also support passage of a Build Back Better Act that is as bold as the votes will bear, that is fiscally disciplined, and that prioritizes measures to combat climate change. There is no—zero—linkage between these two bills in my mind. I will continue to assess each bill on its own merits and to cast my vote accordingly.

“No member of Congress, and certainly no member of my own party, has the slightest leverage over my vote. I will do what I believe is in the best interest of my constituents and my country, and what comports with my conscience.”

The moderates are fuming that Pelosi broke her promise and Biden helped relink the infrastructure and reconciliation bills.

Murphy is even more scathing: pic.twitter.com/57pqtXeRhy

Top NBC Journalist Morales Leaves The Network, Rumors She Is Joining 'The Talk'

‘Please explain the purpose of the mask’: Sharyl Attkisson asks the RIGHT QUESTION, gets LOTS of answers.