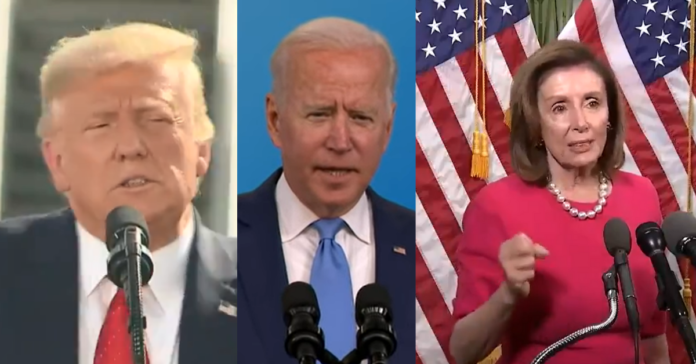 Former President Donald Trump is preparing to checkmate President Joe Biden and Pelosi’s Select Committee looking into Jan 6 with a lawsuit to block testimony and the release of official White House records.

Trump will claim executive privilege to block the release and to stop testimony from key aides like Mark Meadows. But while Trump has the right to claim it, and in the past presidents honor what the last guy wanted, that will not happen here.

Biden has publicly come out and said he will not assert executive privilege for Trump and most legal experts say the ultimate right stands with whoever is in the office.

So Trump will sue. The courts move slowly and as the Jan 6 committee seems to be all about the 2022 midterms, Trump will win just by delaying the case. Whatever reason the Dems gave for having the committee, the slow pace that it has moved leaves many believing it is a political stunt for the midterms. Why did they wait one year if it was so urgent?

So, if that was their plan it backfired because when Trump sues the case will be tied up in the courts, this is a key privilege case so it will probably go to the Supreme Court and that will take years. Years. The midterms are in one year. The GOP will win unless Biden gets a miracle.

The Dems arrogance to time this for the midterms is another example of their sheer incompetence that will come back to haunt them in 2022.

“We will fight the subpoenas on executive privilege and other grounds for the good of our country, while we wait to find out whether or not subpoenas will be sent out to Antifa and BLM for the death and destruction they have caused,” Trump said earlier.

“Executive privilege will be defended, not just on behalf of my administration and the patriots who worked beside me, but on behalf of the office of the president of the United States and the future of our nation,” Trump said earlier.

The plan to prevent House select committee investigators from receiving Trump White House records revolves around exploiting the procedure by which the National Archives allows both the Biden administration and Trump to review materials for executive privilege claims.

After the National Archives identifies and transmits to Biden and Trump the records requested by the select committee, Trump has 30 days to review the materials and ask the administration to assert executive privilege over any to stop their release.

The records are being delivered to Biden and Trump hundreds or thousands of pages at a time on a rolling basis, and the first tranche of documents was sent by the National Archives on 31 August, according to a source familiar with the matter.

As president, Biden retains the final authority over whether to assert the protection for specific documents, meaning that he can instruct the White House counsel, Dana Remus, to allow their release even over Trump’s objections after an additional 60 days has passed.

WATCH LIVE: Austin, Milley, and McKenzie testify before House committee at 9:30AM