Sean Hannity: “Joe Biden’s A Sleazy 1970’s Politician Who Is Not Qualified To Be President” 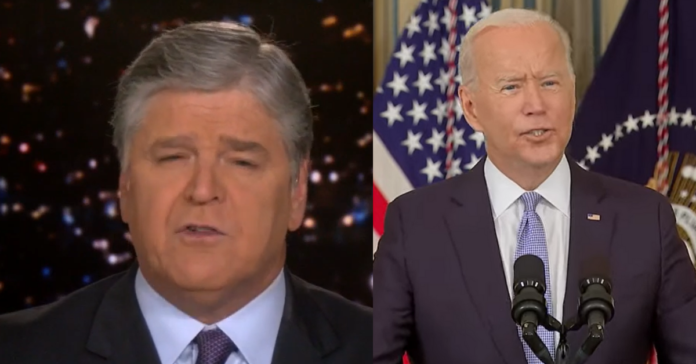 Sean Hannity ripped into Joe Biden calling him ‘asleep at the wheel’ before calling him ‘unqualified’ to be president. Sean said:

“Joe Biden is not losing sleep over the innocent people he left behind. According to Joe Biden, there was no other choice. His advisors agreed that we had to pull out and leave no troops behind.

“As you can see, Joe Biden was lying. He is not an honest person. When the going gets tough, Joe Biden lies and takes zero responsibility.

“The buck does not stop with him. He is a sleazy, disreputable 1970s politician from Delaware, who is not qualified to be president of the United States.”

Hannity said because Biden is “asleep at the wheel” the far-left can push him around, “they call the shots, he answers to them and if they get their way, America will never be the same.”

“45 days since hundreds and hundreds of Americans, their families abandoned behind enemy lines.

“45 days since thousands of green card holders, people eligible to be in this country legally were abandoned.

“45 days since thousands of SIV holders and their families were abandoned and our Afghan allies.

“And 40 days since Joe Biden lied to the entire world and promised to stay in Afghanistan until every single U.S. citizen was safely out of the country,”

“Sadly, that wasn’t Joe Biden’s only blatant lie, because today on Capitol Hill, Biden’s top military advisers, they contradicted him over and over and over again.

“He told fellow Democratic socialist George Stephanopoulos over at ABC that his military advisers did not recommend a continued US military presence in Afghanistan.

“According to everyone that testified today on Capitol Hill under oath, they say Joe Biden was lying.”