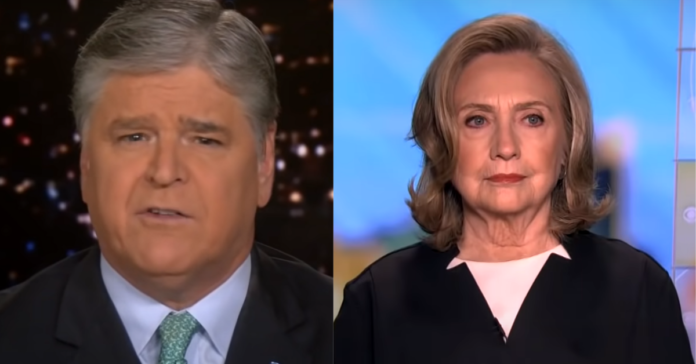 Sean Hannity just busted Hillary Clinton promoting the bunk story her ex-campaign lawyer was indicted over. Hannity went back to before the historic 2016 election to find the incriminating evidence that ties up a lot of loose ends on what could, if Durham is not done, be one of the biggest political scandals this country has ever seen.

Now, it is possible that this was just dirty politics and is routine, but that theory falls apart when you consider the entire chain of events.

The staged political hit on Trump becomes clear when you put the pieces together. You have the now-indicted Mark Sussman planting the phony story about Trump and Alfa Bank to the FBI and the media.

Hillary was quick to tweet out the bogus allegation in what now seems very coordinated and the story took wings. Next, you have the discredited dossier and all the shenanigans around that, many of which lead back to the Clinton’s or people connected to them.

The FBI and James Comey’s complicity comes up next – he knew that by telling Trump about the dossier it would become news fit to print, not just more salacious rumors.

Who leaked to David Corn and other reporters the fact that Comey, who was the only one in the room with Trump when they talked about the dossier, had briefed Trump on it thus making it ‘news’ so they could run the story without getting hit with a defamation lawsuit or charged with having shoddy journalistic ethics?

Then you have the Carter Page FISA warrant that Comey’s gang only got because they lied about Page. One of Comey’s lawyers was indicted for lying on the FISA warrant.

Remember all those ex-military and NSA talking heads giving new life to the Russia story when they reported on the Page warrant and more importantly on its renewal by saying the judge would never extend a FISA warrant unless ‘they had proof of ongoing criminal behavior?’

It was a well-executed political hit on Trump whose goal now seems clear – block his foreign policy decisions that would hurt the security state like getting out of all foreign entanglements.

Sean Hannity ties the story together by bringing up Hillary’s early social media post but in doing so he raises more questions, mainly, how much were Bill and Hillary involved in this disgrace, and will they face consequences?

A social media post from Hillary Clinton surfaced on social media this week regarding the early origins of the Russia-Trump collusion hoax, showing the Democratic nominee claiming a “covert server” has been discovered linking Donald Trump to a “Russian-based bank.”

“Computer scientists have apparently uncovered a covert server linking the Trump Organization to a Russian-based bank,” posted Clinton on Twitter.

Hillary was promoting the same conspiracy theories as late as June 2021.

“I think that his long history with foreign relations, his eight years as Vice President, seeing what worked, what didn’t work. Watching the disaster of the Trump presidency,” said Clinton, referring to Joe Biden.

“Trump gave Putin a green-light to do what he wanted once he helped elect Trump, of course!” added the former Secretary of State.