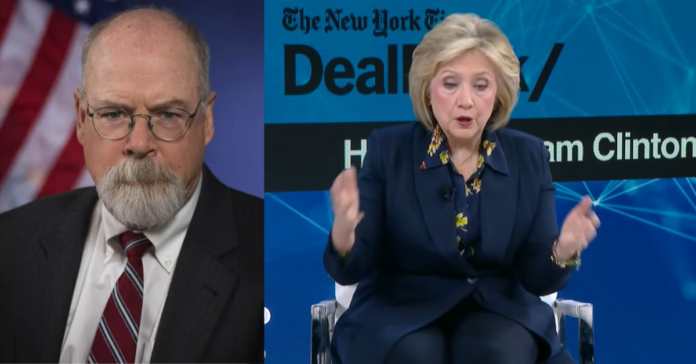 Prosecutor John Durham has told a lawyer who works for the firm that represented Hillary Clinton campaign’s that he will indict him before the weekend is up according to a bombshell report from the New York Times.

Durham wants to indict Michael Sussmann for lying about who he represented when he told F.B.I. (in 2016) about potential ties between Trump and Russia via an Alfa Bank connection.

Durham “has told the Justice Department that he will ask a grand jury to indict a prominent cybersecurity lawyer on a charge of making a false statement to the FBI,” the New York Times claimed before adding the dagger – AG Merrick Garland is on board and did not overrule him.

“Mr. Sussmann has committed no crime. Any prosecution here would be baseless, unprecedented, and an unwarranted deviation from the apolitical and principled way in which the Department of Justice is supposed to do its work. We are confident that if Mr. Sussmann is charged, he will prevail at trial and vindicate his good name.”

Sussmann’s lawyers “are said to have insisted that their client was representing the cybersecurity expert he mentioned to Congress and was not there on behalf of or at the direction of the Clinton campaign and that the billing records are misleading.”

Sussmann’s lawyers claim that he was not charging his client for work on the Alfa Bank issue but needed to show internally that he was working on something. Which sounds like fraud. Sussman’s lawyers did admit they expect their client to be indicted soon.

According to the Times, a former F.B.I. lawyer told investigators that Mr. Sussmann said he was not meeting with the feds on behalf of any client when he pushed the bogus Alfa Bank story. This was contradicted by Sussman’s testimony to Congress.

According to Sussmann’s own bio he worked for the Clinton campaign. It says: Michael Sussmann, a former federal prosecutor, is a nationally recognized privacy, cybersecurity, and national security attorney.

He is engaged in some of the most sophisticated and high-stakes matters today, taking on global data breaches, government investigations, and other bet-the-company representations.

Michael’s more notable work includes his past representation of the Democratic National Committee and Hillary Clinton’s presidential campaign in their responses to Russian hacking in the 2016 presidential election. This work was detailed in the best-selling books The Apprentice (2018), The Perfect Weapon (2018), Russian Roulette (2018), and Hacks (2017).

From The New York Times:

John H. Durham, the special counsel appointed by the Trump administration to scrutinize the Russia investigation, has told the Justice Department that he will ask a grand jury to indict a prominent cybersecurity lawyer on a charge of making a false statement to the F.B.I., people familiar with the matter said.

Any indictment of the lawyer — Michael Sussmann, a former federal prosecutor and now a partner at the Perkins Coie law firm, and who represented the Democratic National Committee on issues related to Russia’s 2016 hacking of its servers — is likely to attract significant political attention.

But Mr. Durham did apparently find an inconsistency: Mr. Baker, the former F.B.I. lawyer, is said to have told investigators that he recalled Mr. Sussmann saying that he was not meeting him on behalf of any client. But in a deposition before Congress in 2017, Mr. Sussmann testified that he sought the meeting on behalf of an unnamed client who was a cybersecurity expert and had helped analyze the data.

Moreover, internal billing records Mr. Durham is said to have obtained from Perkins Coie are said to show that when Mr. Sussmann logged certain hours as working on the Alfa Bank matter — though not the meeting with Mr. Baker — he billed the time to Mrs. Clinton’s 2016 campaign.

NEW: John Durham is reportedly seeking an indictment against Michael Sussmann of Perkins Coie over the lawyer allegedly misrepresenting who his client was to the FBI when pushing false claims about secret Trump-Russia server communications.@DCExaminer https://t.co/PTbHlnKQqc