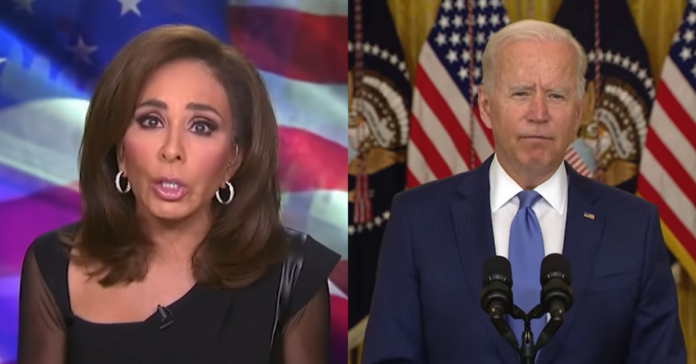 Judge Jeanine Pirro called out President Joe Biden’s disastrous handling of the border crisis saying the current reality represents the “breakdown of America” before accusing Biden of having no plan to solve the crisis.

Pirro said: “They have no plan to fix it because they don’t want to fix it. America is losing its status as a sovereign nation. All of these illegals, now with this mess, all these people have been invited in.

“They’re being bussed into the interior of the country. They have the right to refuse a vaccine. This is the breakdown of America, the destruction of democracy.

Vice President Kamala Harris inexplicably called for an investigation into the Biden administration’s handling of the border (that she was put in charge of) saying she was “deeply troubled” about the treatment of Haitians in Texas.

“What I saw depicted, those individuals on horseback treating human beings the way they were was horrible.

“I fully support what is happening right now, which is a thorough investigation into what is going on there.

“But human beings should never be treated that way, and I’m deeply troubled about it.

“I mean, talk about a country that has just experienced so much tragedy.

“And we really have to do a lot more to recognize that, as a member of the western hemisphere, we’ve got to support some very basic needs that the people of Haiti have to get back up and to do what folks naturally want to do, be them from Haiti or in the countries in Central America. People want to stay home.

“They don’t want to leave home. But they leave when they can not satisfy their basic needs.

“DHS does not tolerate the abuse of migrants in our custody and we take these allegations very seriously,” the department said.

“We are committed to processing migrants in a safe, orderly, and humane way. We can and must do this in a way that ensures the safety and dignity of migrants.”

PIRRO on BORDER CRISIS: ‘This is the Breakdown of America’ https://t.co/VDpuZGtUhd

ICYMI: “Tonight the United States of America stands guilty of killing 10 civilians including an Afghan working for a U.S. aid group carrying water who wanted to become an American citizen…along with seven innocent children.” #OpeningStatement pic.twitter.com/srW2uiNdbU