Dem Border Mayor Comes Clean: ‘It was working under Trump, it’s really an embarrassment for us as a country now’ 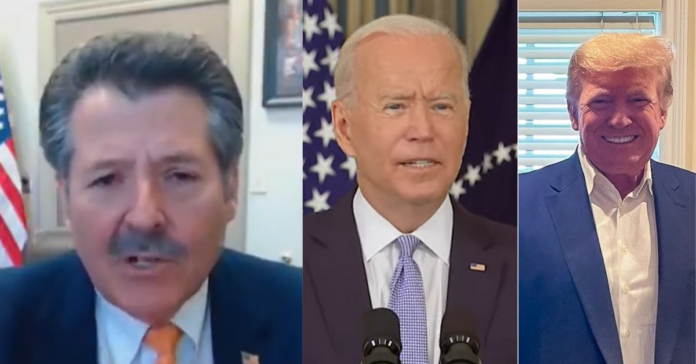 The Democratic mayor of Laredo, Texas, ripped President Joe Biden’s immigration policy saying Biden and the Dems in DC have no plan to solve the crisis.

Mayor Pete Saenz said: “We need to truly secure the border. It was working under Trump, call it whatever you want to call it, but it was working.

“We’re spending billions of dollars on alternative things but immigration isn’t given priority. Border Patrol isn’t being funded to the extent that Border Patrol has to be funded.

“Their workload has increased to three times or four, and yet they’re not funded. So, that kind of leads me to think the Democrats have the same mentality as defunding law enforcement generally.

“The key, ultimately, is removing the incentive to come to the border and file for asylum. I believe in the asylum process.

“No person wants to spend their last penny giving it to the cartels, then risking life and limb travel to try and get all the way to the border.

“And then there’s still the uncertainty that they may not even be granted asylum. At some point, they’ll be fugitives.

“If Biden doesn’t come out with implementing a virtual wall, people here will be begging for a wall, a physical structure, simply because of his lack of attention to the border and especially the size of these surges.

“The border’s not secure and hasn’t been for a while.

“We can’t continue this way, and I really haven’t seen any measures yet from Washington to remedy this.

“It’s really an embarrassment for us as a country now. You know we can do so much better,” he said.

A Border Town’s Democratic Mayor Has Had Enough. Texas mayor Pete Saenz: ‘It was working under Trump, call it whatever you want to call it, but it was working’ https://t.co/QJol1lHihE